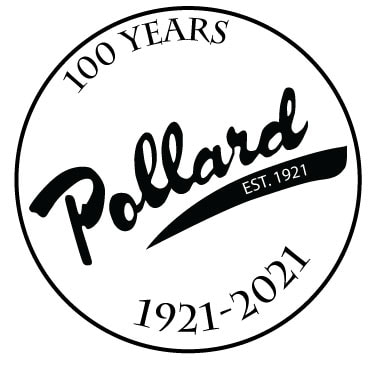 Pollard Brothers has been manufacturing functional, durable and versatile steel crafted equipment since 1921 when brothers Henry and Bert Pollard formed the company. Civil and Mechanical Engineer graduates from the University of Illinois, Henry and Bert returned to the Chicago area after serving in the US Army during World War I. Drawing on their education and experience they sought to manufacture a more substantial workbench leg for the field and factory. Using their knowledge and work ethic, within a few years Pollard Bros. was known nationwide for the reliability and strength of their lifetime steel crafted equipment.

The cornerstone of the Pollard product line has always been the 200 Series Work Bench Leg, which is as reliable today some eight decades after its inception, as it was in 1921. From small manufacturers to institutions like the United States Armed Forces, factory and warehouse floors nationwide were lined with these Arc-Welded Angle Iron Bench Legs as early as the mid 1920s. In a short time an expanded product line was developed, evolving into a dozen product categories and hundreds of individual styles.

In the 1980s Steve Hein, Bill Hein’s son, continued the family tradition, and his brother Will Hein joined the company in the 1990s. Steve and Will were able to streamline Pollard Brother’s production line, leading to the finest quality product at the best possible price. They also increased Pollard Brothers reach; taking the Pollard name from being known regionally and nationally to respected and requested worldwide whenever and wherever strong, dependable lifetime Steel Crafted Equipment is needed.

Presently, Steve Hein’s sons, Jason and Nathan Hein, carry on this Fourth Generation family business.  Pollard Brother’s full line of steel crafted equipment is now sold across the globe, through distributors and designers alike. From the home workshop to the factory floor Pollard Brothers enjoys a long held reputation for quality and reliability as exemplifed by decades of repeat business. Now carrying workbenches, machine tables, shop stools, locker room benches, carts, heavy duty trucks and storage racks just as suited for the basement, garage or home workshop as the factory or jobsite, Pollard Brothers makes the products you need for the space you have. No other workbench, no other equipment, will stay as strong or last as long as Pollard Brothers.